For the second consecutive year and ninth time overall, the Trinity Christian Academy Conquerors are FHSAA State Champions. The Conquerors won their first Class 2A title Thursday night in Tallahassee with a robust and commanding 41-23 victory over the defending 2A champions of the past two seasons, the Lions of Champagnat Catholic School.

Running backs Darnell Rogers and Treyaun Webb combined for 353 yards and 5 touchdowns on 40 carries to lead the Conquerors to victory. Seth Bialek had a touchdown reception as a receiver and 5 PATs as the place kicker, totaling 11 of TCA’s 41 points.

Rogers amassed 188 yards on 19 carries and scored Trinity’s final three touchdowns of the game; all three came in the fourth quarter. After a long pass completion from Colin Hurley to Fred Highsmith to the 2 and a penalty that set the ball up at the 1, Rogers forced his way into the end zone early in the fourth quarter to make the score 27-7 and seemingly put the game out of reach.

Champagnat, however, scored a pair of touchdowns within the next 5:31. Quarterback Ennio Yapoor, the #4 freshman QB in the nation, completed a 6-play, 80-yard drive with an 11-yard touchdown run of his own around the right end; he then completed a pass for a nifty 2-point conversion to make the score 27-15. The Lions’ second score of the quarter happened on a 51-yard pass from Yappor to Marvin Sims, and another successful 2-point conversion made the score 34-23.

Rogers got his second touchdown in between Champagnat’s two scores. Rogers took one in from 3 yards out to cap a 4-play, 55-yard drive to counter Champagnat’s first of those two touchdowns.

Rogers did put the game out of reach with a 46-yard blast for the game’s final tally with 1:51 left to play; that run earned him the Player of the Game honor.

Cornerback Jakobe Jones intercepted a pass on Champagnat’s final attempt, and Hurley took a knee to let the clock expire and give the Conquerors the title.

Webb scored his 9th and 10th touchdowns of the postseason as he compiled 165 yards on 21 carries. Webb’s 43-yard touchdown in the first quarter answered Champagnat’s score on the game’s opening drive. After Trinity fell behind 7-0, a variety of plays set up Webb with 1st and 10 at the Lions’ 43. Webb appeared down at the line of scrimmage, but only his hand touched the ground. Webb regained his footing and took off up the middle to race untouched from there into the end zone with 8:22 left in the quarter.

Bialek got his TD reception, his only catch of the night, on a 14-yard slant route. Hurley hit Bialek at the 1, and Bialek stepped across the goal line with ease with 3:38 left on the clock.

Trinity led 14-7 at the end of the first quarter, and neither team scored in the second.

Trinity extended the lead early in the third quarter with a 5-play, 42-yard drive following a very short punt. Webb capped the drive with a 12-yard touchdown run that gave TCA a 21-7 lead.

Hurley, the nation’s #2 freshman quarterback, was 8 for 16 for 125 yards, 1 touchdown, and 1 interception in passing. He finished his freshman season with 2,168 yards and 24 touchdowns while completing 56% of his passes.

NOTE: Senior safety Keaton Thomas was honored before the game for earning the Henry O. Langston Scholar Athlete Ward. Thomas has a GPA of 4.2. 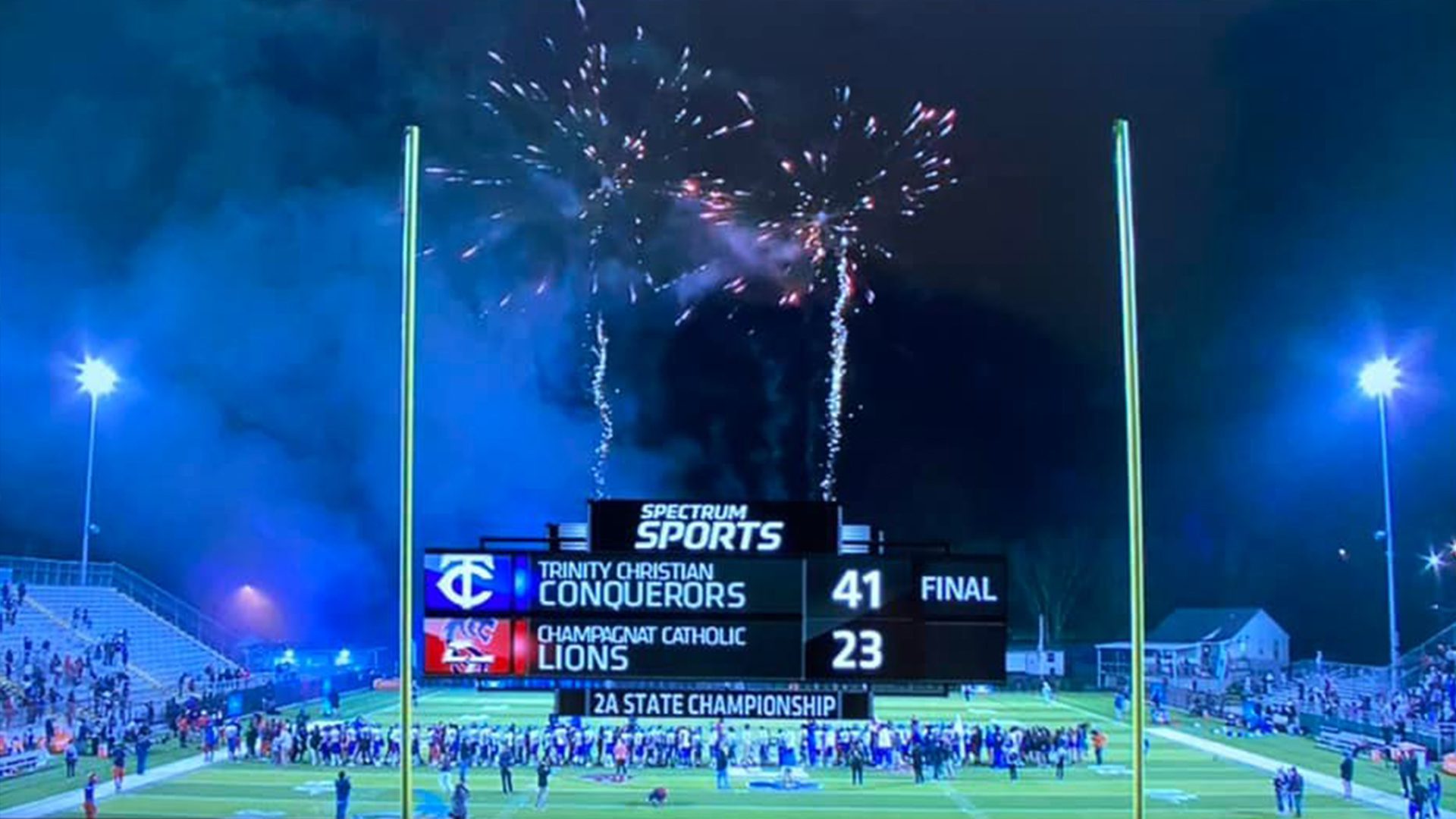