After surrendering 50 points to Florida’s #26 Clearwater Academy International a week prior, the Trinity Christian Academy Conquerors’ defense faced questions about its strength and resilience. The defense answered those questions by holding a Super 10 powerhouse to only 129 total yards and 6 points of offense in TCA’s 26-13 win over the Columbia High School Tigers in Week 5 on September 24.

In fact, remove one big play from Columbia, and the defense held the Tigers to 59 total yards and 0 points offensively.

Trinity’s defense kept Columbia to only 118 yards passing (70 on one play) and only 11 – yes, 11 – yards rushing while forcing 3 fumbles, recovering 1 of them, and picking off 2 passes.

Linebacker Cameron Anderson led the Conquerors with 7 total tackles with 5 of them solo, including 3 for loss and a sack. Anderson also intercepted a screen pass with 5:40 left to play to erase any visions Columbia may have had to catch up from a 13-point deficit.

Jaykob Jones also intercepted a pass with 2:16 left to end Columbia’s last chance to pull closer in addition to making 3 tackles, all solo.

Caden Morrell totaled 6 tackles, Tito Butler had 4, and 13 other Conquerors each recorded tackles. Morrell and Butler each sacked the quarterback 1 time. The three sacks totaled -20 yards rushing for Columbia.

Backup quarterback Evan Umstead was Columbia’s leading rusher with 21 yards on 3 carries. Umstead threw for 13 yards, but Anderson intercepted his final pass attempt late in the 4th quarter.
The only defensive blemish was a 70-yard touchdown pass from starting quarterback Kade Jackson to Jace Hoskey that temporarily put Columbia ahead 6-3 at the 6:41 mark of the 1st quarter. Cam Miller, however, blocked the extra point, and that was the only time Trinity trailed.

Kicker Seth Bialek started the scoring with a 36-yard field goal that gave TCA an early 3-0 lead to cap the opening drive. Bialek connected again from 25 yards nearly midway through the 2nd quarter to make the score 13-6. He was also 2 for 3 in extra-point attempts.

Quarterback Colin Hurley hit receiver Fred Highsmith for a pair of touchdown passes, 1 in each of the first 2 quarters. Hurley found Highsmith from 17 yards out with 2:30 left in the first to put the Conquerors ahead for good at 10-6 and again for a 15-yard touchdown with 4:27 left until halftime. That second touchdown made the score 20-6.

Hurley fired his third TD pass of the night to Xander Ross, a screen pass that Ross took into the end zone after faking out a defender for a 5-yard touchdown reception. That score was the final tally for either team.

The biggest single play of the night, however, came from Columbia’s star two-way player, Tray Toliver, as time expired in the 2nd quarter. With Trinity driving from their own 18 to the Columbia 19, Toliver intercepted a pass at the 4 and returned it 96 yards for the touchdown. That play made the score 20-13 heading into the intermission, but the game overall was not as close as the scoreboard indicated.

TCA running back Treyaun Webb returned to action and complied 96 yards on 22 carries; only a penalty kept him from recording a touchdown. Darnell Rogers topped 100s yard for the 4th time in 5 games, totaling 135 on 17 carries. 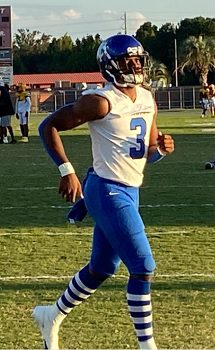 Treyuan Webb made his season debut Friday at Columbia.

The Conquerors (5-0) will have their harshest test of the season when they visit their biggest rival of all in Bolles (5-0) in Week 6 on Friday, October 1. Bolles, Florida’s #18 team, defeated potential Trinity playoff opponent University Christian (3-2) 31-0 in Week 4.

Following Bolles, the Conquerors are home against Plantation’s American Heritage on October 8 before heading to Tallahassee’s Florida State University High School (4-1) on October 15.