Many considered Friday night’s rivalry match-up between Bolles and Trinity Christian Academy the biggest game of all in North Florida, and the two teams justified the moniker. Great plays from both teams on both sides of the ball provided the excitement, and a second-half explosion by one the State’s best running backs gave Trinity Christian the 27-14 win at home.

Darnell Rogers broke a 14-14 tie late in the third quarter when he evaded tacklers at the line of scrimmage and outran the secondary for 54 yards into the right corner of the end zone. With the extra point (Seth Bialek), the Conquerors led 21-14.

Rogers was not finished. With 5:09 left on the clock, Rogers crossed the goal line again after blasting through a wide gap that his offensive line opened for him and motored 75 yards on 2nd and 20 from the Trinity 25. Bolles’ Spencer Surface blocked the extra-point attempt, but the Conquerors still led 27-14. The defense made sure that lead would stand by forcing two punts and a turnover on downs in between.

That turnover on downs came on a tackle for loss by Cam Anderson on Ty Neal’s 4th and 1 rush from the Trinity 34.
Rogers finished the night with 134 yards rushing and 2 touchdowns on 6 carries. He also returned a kickoff for 23 yards to set up his first TD run, giving himself a total of 157 all-purpose yards.

Trinity opened the scoring on a 54-yard bomb from Colin Hurley to Miles Burris at the 8:52 mark of the second quarter. Hurley rolled right and launched the ball to a well-covered Burris, and Hurley placed the ball perfectly. Burris caught it at the 15 and ran into the endzone untouched to give Trinity the lead.

Late in the second, Bolles had a methodic drive stopped when Anderson intercepted a pass from Ethan Drumm and returned it 14 yards to the Trinity 41. A 24-yard pass to Burris put the ball at the Bolles 21, and Treyaun Webb took it from there with three rushes that culminated in a 4-yard touchdown run. 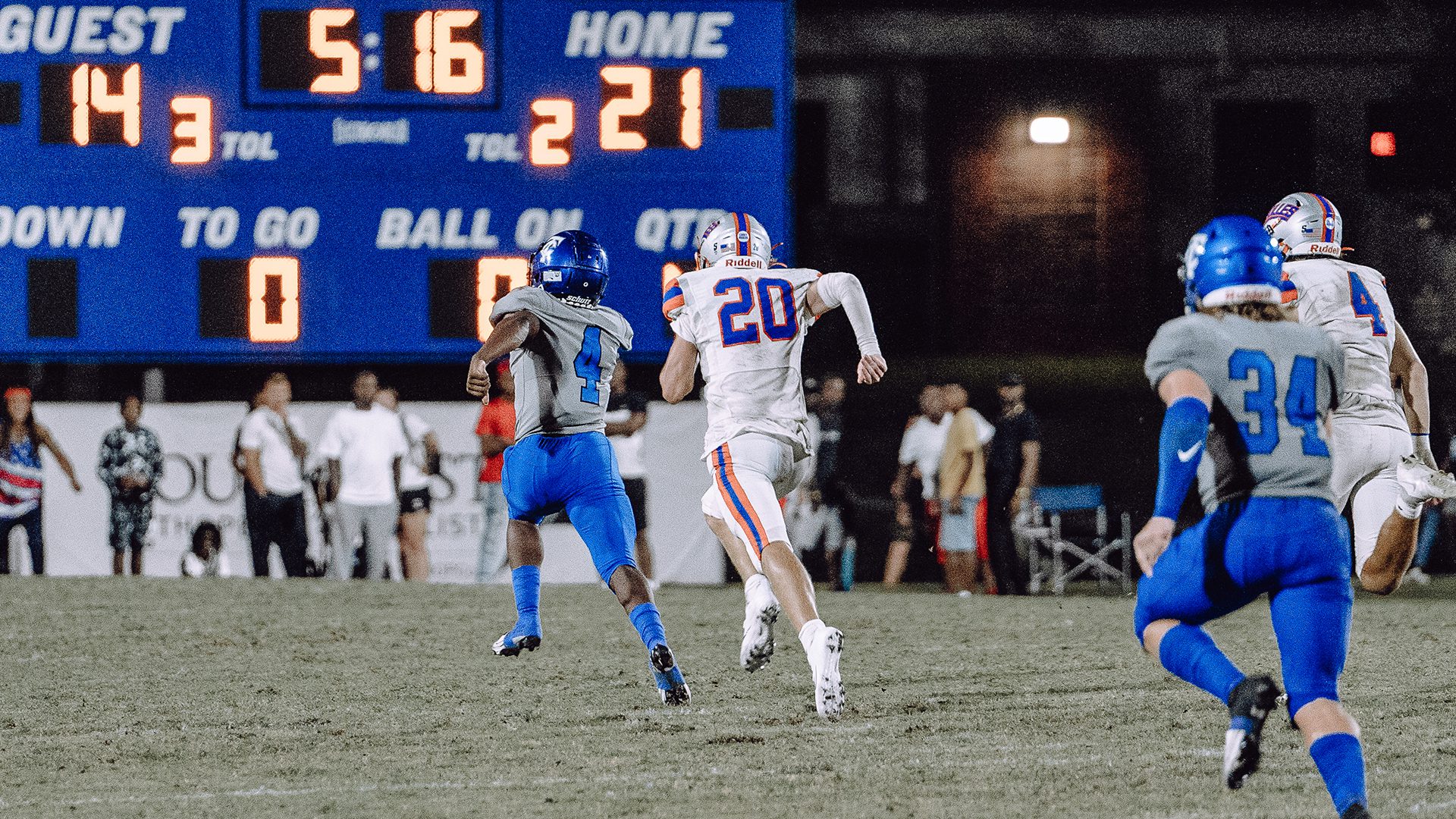 Bolles, though, used the opening drive of the second half to cut the deficit to 14-7 thanks to the running duo of Neal and Emmett Grzebin. The two combined for 21 of the 52 needed yards after Kavon Miller’s 51-yard kickoff return. Drumm also hit Kaleb Lampkins for a 17-yard pass during the drive, and Neal broke a potential tackle in the backfield to score on a 1-yard touchdown run. Matthew Berry’s extra point made it 14-7.
Bolles then forced a punt, and Grzebin took a 4th-and-1 handoff 55 yards for the touchdown that helped tie the game at 14-all with Berry’s PAT.

The first quarter featured three fumbles and an interception. TCA fumbled twice to Bolles, and on the interception return of Jacob Campen of Bolles, TCA’s Kyle Boylston stripped the ball and recovered the fumble in the endzone to thwart a potential Pick 6.

Drumm, a sophomore backup forced to start due to injury to D.J. Moore, was 10 for 21 for 115 yards. Lampkins and Chase Collier combined for 6 receptions and 70 yards. On the ground, Grzebin carried 24 times for 11 yards and a touchdown while Neal had 10 carries for 43 yards and a score.

The Conquerors (4-0) will face Columbia (3-2) at 7:30 p.m. on the home field on Friday, September 23. A district game at Christ’s Church Academy follows on September 20 before the Conquerors visit the mighty Riverside Generals on October 7. 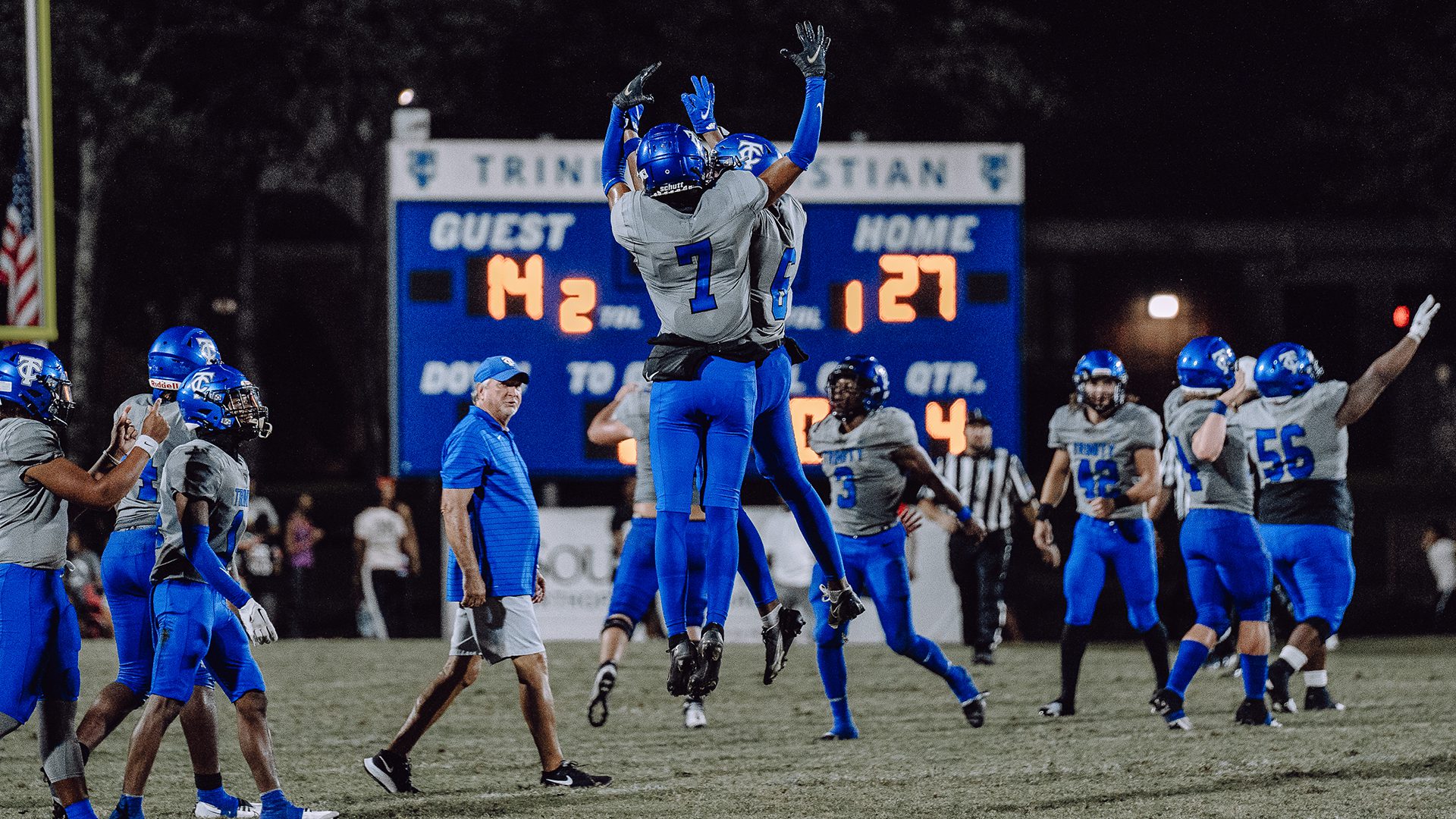