Well into the fourth quarter, there was still no clear winner as TCA led 36-24, and even after Darnell Rogers added a touchdown midway through the final period, Columbia still did not quit. Columbia added a touchdown of their own and recovered the ensuing onside kick. The Conquerors’ defense, though, then made a tremendous stop after a 1st-and-Goal situation and kept the Tigers from Lake City’s Columbia High School from pulling any closer.

Trinity Christian Academy held on for the 43-30 win in a battle in which both teams used every weapon available and, as the saying goes, left it all on the field.

That 29-yard touchdown run from Rogers was his second of the night and gave the Conquerors a 19-point lead at 43-24 with 6:35 remaining. Columbia then marched 89 yards for the game’s final score with 3:52 left to play; the two-point conversion failed, keeping the score at 43-30.

The Tigers then ran a successful onside kick to the Trinity 45, and when yardage from three TCA dead-ball penalties were added, the Tigers had 1st and Goal at the Conquerors’ 8.

That’s when the defense made its best stand of the season to date. 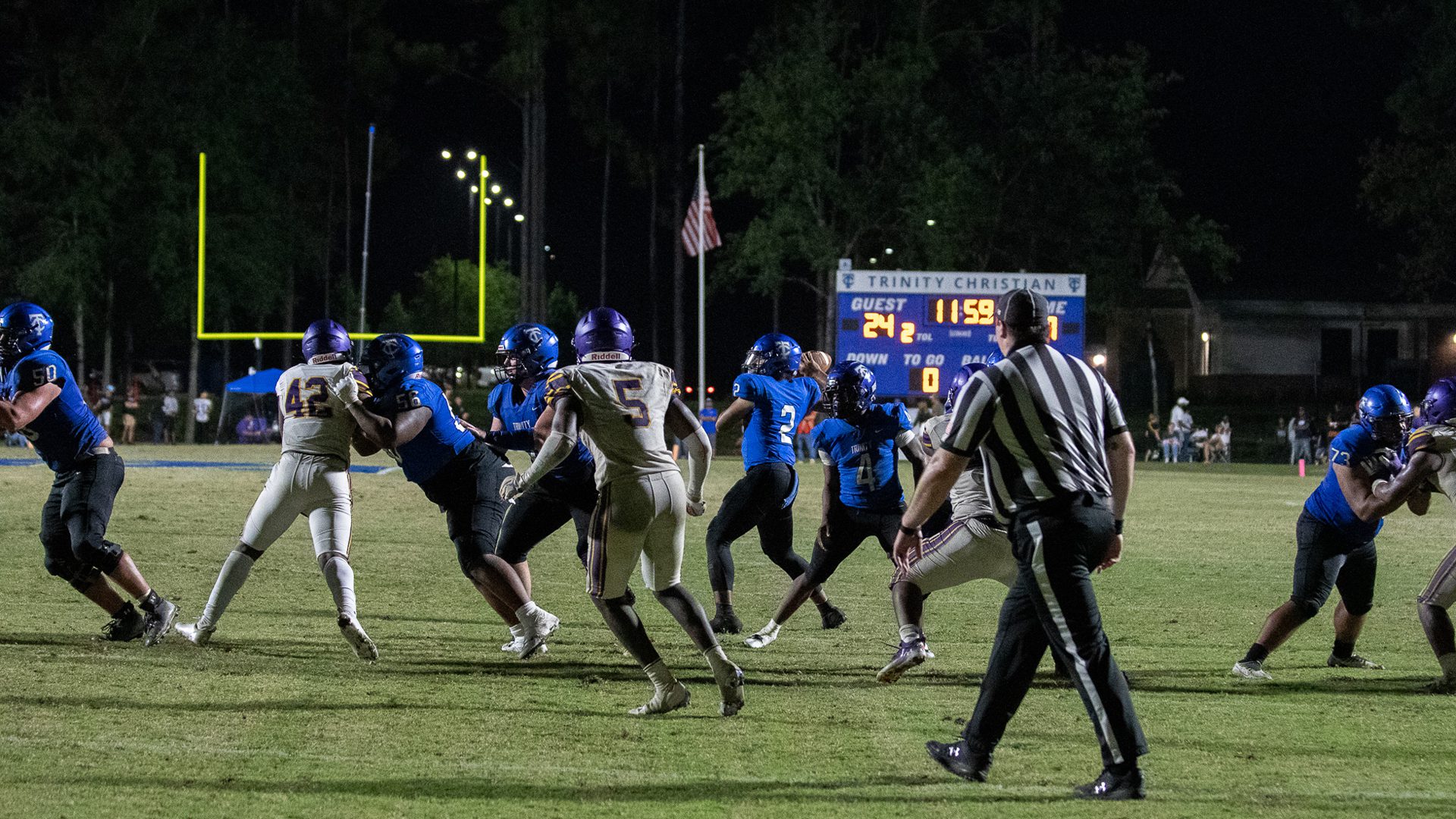 Columbia ran once and threw three times, and each time the defense thwarted the effort. A 3-yard run on first down got the ball to the 5. Three well-covered, well-defended receivers were then unable to make the catches in the end zone in each subsequent play, and the Conquerors took over on downs with 3:01 left and worked the clock down 0:00 to end the game.

Columbia started the scoring with a first-quarter field goal, but TCA stormed back less than two minutes later. Quarterback Colin Hurley hit London Smith with a 46-yard bomb to put Trinity in the lead at 7-3. Jefferson answered for Columbia with a strike to receiver Camdon Frier, and the speedy FSU commit took in it from 41 yards out to put CHS back in front at 10-7.

The first quarter ended with a TCA 9-play, 71-yard scoring drive that culminated in a Hurley 16-yard bullet to Miles Burris for the touchdown as the clock expired. The extra point was blocked, but Trinity led 13-10.

In between Burris’s second and third touchdown receptions, Columbia scored twice with a Trinity TD sandwiched in the middle. Jefferson hit Frier with a 61-yard catch and run for a touchdown, and Rogers responded with his first scoring run of the night, a 1-yard power burst that capped a 17-play, 96-yard drive that started at the Trinity 4. After the ensuing touchback on the kickoff, Jefferson kept the ball on first down and outran the defense 80 yards for the score.

Early in the fourth quarter, Cam Anderson and Bryce Kazmierczak sacked Jefferson for a safety that made the score 36-24.

Defensively, Anderson, Tomarion McCray, and Trevyn Smith combined for 20 of Trinity’s 39 tackles, and Walker Ashley intercepted a pass that was batted into the air at the line of scrimmage.

The Conquerors (5-0) will visit district opponent Christ’s Church Academy on Friday, September 30. Another road game has Trinity at Riverside before the final three regular-season games all occur on the home field.